Two of the USGA limitations on driver heads are size and MOI. The maximum driver head size is 460 c.c. plus a 10 c.c. tolerance making the absolute maximum legal size 470 c.c. The term c.c. stands for cubic centimeters.

The maximum allowable driver head M.O.I. is 5900 g-cm² plus a tolerance of 100 g-cm² making the absolute maximum driver head MOI 6000 g-cm². The term g-cm² stands for grams per centimeter squared.

Regarding MOI, some confusion can exist because the numbers used to express it in our industry can be in different units. In other words, the Maltby Playability Factor for irons uses oz-in² (ounce/inches squared).

Bobby Grace putters and some others use kg-m² (kilograms per meter squared). A number of golf club manufacturers use g-cm² (grams per centimeter squared) as already discussed. The MOI machine that is used in the Golf Club Design Studio can provide MOI readings in 13 different unit formats.

The point is that a simple conversion factor can be applied to each format to convert directly and accurately to any other format so they all basically mean the same thing. 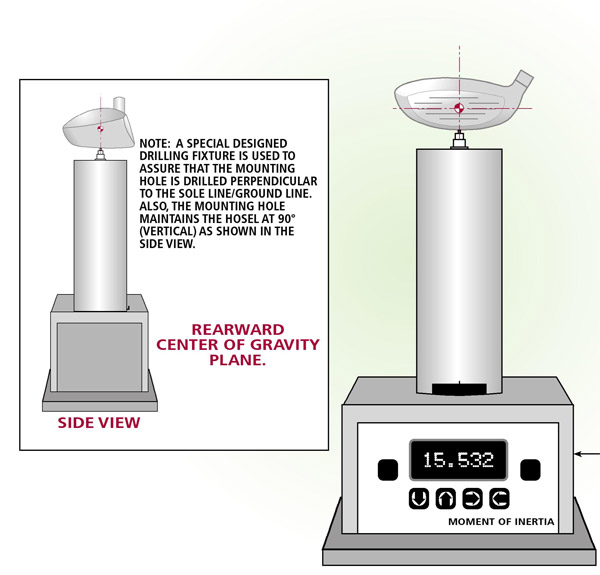 Head sizes in the early 1980’s started off smaller than their persimmon counterparts and then gradually became similar in size and then bigger in size. Stainless steel as a material had limitations in making larger driver head sizes because it simply was not strong enough to keep the faces from caving in when size was increased beyond its limits.

The exotic driver head materials and unique head manufacturing methods revolution started in earnest during the mid 1990’s to make heads bigger and with higher CORs (coefficient of restitution or spring face designs).

It is interesting to note here that as the heads became larger in c.c. size the MOI’s also became greater as a result. However, the advertising did not tout higher MOIs but concentrated mostly on COR which was the hot trend at the time.

The MOI measurement for modern day drivers is a function of five basic mass and dimensional properties; the head size, material, shape, weight and center of gravity location.

Since the head size is limited by the USGA and the head weight is dictated by the swingweight we desire, this leaves shape, materials, and center of gravity location as the easiest variables to significantly modify to achieve higher driver MOI.

We have measured the horizontal MOI of many 450 to 460 c.c. drivers in the Golf Club Design Studio and we have found that they basically range from 4300 to 4700 g-cm². The USGA initially proposed a limit on MOI in 2005 of 4750 g-cm² but the manufacturers voiced strong opinions about this limitation and the U.S.G.A. relaxed it to 5900 g-cm².

According to Dick Rugge, senior technical director for the USGA, the limit was raised because the difference would mean little for golfers in increased performance. Rugge also said that if you were going from 2000 to 3000 g-cm² it would be huge but at the higher level going from 4750 to 5900 g-cm² it would have a much lesser effect. I agree with his assessment.

My research and study shows that with current technology it would be very difficult to achieve MOIs higher than 5400 g-cm². Achieving the USGA limit of 5900 g-cm² would require new head manufacturing technology and/or new head materials to be developed. This will probably be accomplished in the near future.

Shape, along with external and internal weighting, are about the only clubhead design variables left for the manufacturers to use to alter the center of gravity and/or the MOI. The U.S.G.A has taken away, with the size limit, the easiest way to effectively increase MOI by increasing the clubhead size.

In the early 2000’s, manufacturers strayed from the more traditional (if not larger) head shapes in an attempt to improve the MOI. The manufacturers shape changes coupled with driver head size limitations could only add marginally to the range of driver MOI’s being achieved at the time, but definitely offered a different look. In my opinion, these driver shapes fell more into the current hot trend category vs. significant increased technology to benefit golfers.

There was nothing wrong with the new shapes during those few years, but they did not last partly because, in my opinion, there was not a definitive difference in the comparable playability with the larger, more traditional shapes. Since these “different” shapes have gone away, the majority of the drivers being sold and used today are a traditional shape, even though they are, for the most part, at the max limit for size as outlined by the U.S.G.A.

Be aware that the USGA limit on MOI is only based on the MOI in the horizontal plane (heel to toe) of the clubhead. Some of the manufacturers are also modifying the MOI in other clubhead planes and claiming advantages. One of these is referred to as vertical plane MOI (face to rear). Some even make claims by measuring MOI around the hosel bore centerline.

I cannot substantiate or deny their claims but I can tell you that I personally use the drivers’ horizontal plane MOI coupled with the clubheads rearward center of gravity location as two of the more important variables (mass and dimensional properties) in evaluating driver performance.

One other thing to note about today’s modern drivers. Improvements in materials, design and manufacturing technique have enabled engineers to design adjustability into modern drivers. Loft, Lie, Face Angle, Weight, Center of Gravity location (and as a result, MOI) can all be adjusted to fit a golfer with the simple twist of a wrench.

This technology is fantastic for fitters and golfers alike and I believe has made it much easier to properly fit golfers for drivers than any other time in the modern clubmaking era.

A well trained fitter, with the help of modern launch monitor technology, can dial in the best set up for golfer without having to do all the time consuming things we had to do in the old wooden head days and early non-adjustable metal wood days. Even shaft fitting has become easier with the ability to quickly remove and replace shafts because of the adaptor system employed by many manufacturers.

With regards to MOI, the modern adjustable drivers can be altered in ways that can only minimally affect the MOI of the head. Adding weight, or locating weight more to the perimeter and/or rearward can raise the MOI, but by an amount that most players may or may not be able to notice.

Remember, with these modern adjustable drivers, we are starting with heads that already have historically high MOI’s for the driver category. Moving weight from low and rearward in a driver head to higher and more forward (an new trend in adjustability) will definitely lower MOI and is probably not beneficial except to the better player needing to reduce spin.

The compromise to moving weight more forward or more to the center, from the back and/or from the perimeter, is less forgiveness, or lower MOI. Be sure to understand the tradeoffs and cause and effects when making any kind of adjustment.

This is a great time for any golfer to be in the market for new driver. The reason is to take advantage of the highest technology available today which translates into the easiest to hit and straightest hitting drivers ever made.

Any golfer moving up to this technology should immediately notice the benefits in an easier to hit driver, especially if you still are using your old wood head or steal metal wood from decades ago. This obviously makes our job easier because we can almost guarantee game improvement and a better golfing experience.

Bottom Line, If you hit the ball off-center, higher MOI drivers, such as modern drivers will help you.

The high MOI on modern drivers doesn’t mean much if you have the ability to hit the ball every time on the heads exact horizontal center of gravity location. However, any mis-hits off of the face center of gravity (so-called sweet spot) will feel much more solid, lose less distance and go straighter.

The reason for this is that the higher MOI on large headed drivers better resists clubhead rotation on off center hits vs. lower MOI driver heads. This clubhead rotation occurs around the horizontal center of gravity whenever the ball is not struck perfectly and results in less force (distance) applied to the golf ball.

Modern large headed drivers with higher MOIs simply have less rotation on off center hits resulting in less distance loss. It can be said that they also have much larger sweet spots than lower MOI driver heads.

Couple all this with much higher CORs, increased vertical gear effect, more rearward centers of gravity and the improved flight characteristics of modern golf ball designs and you have the reason why modern large headed drivers hit the ball so much longer and straighter than smaller headed drivers.

As long as the USGA imposes the current limits on driver head size and most major golf club manufacturers keep incrementally increasing MOI as much as they can with existing head materials technology, most all the current top grade driver heads should all perform exceptionally well.

Lastly, it is very important to get correctly fit not only to the best new driver adjusted for you, but also to the best driver shaft, loft, length, grip size and swingweight. Also, don’t forget to get a ball fitting on a launch monitor.

Ball technology has greatly improved in the last decade and having the right type of ball for your game can optimize shot performance. Also, remember that the ball must be teed higher for best trajectory because the vertical center of gravity location on the large headed drivers is actually above the face center vertically.